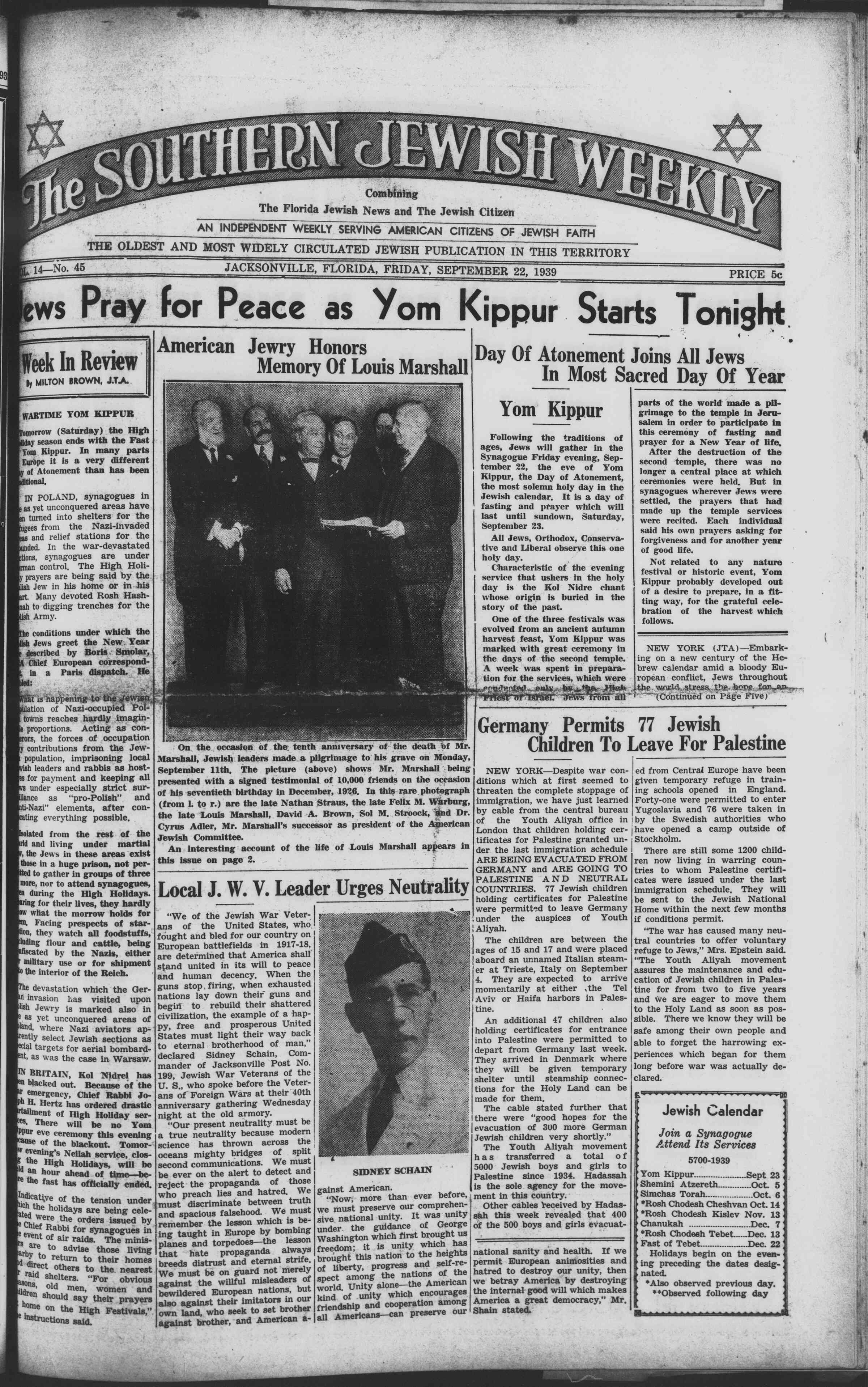 AN INDEPENDENT WEEKLY SERVING AMERICAN CITIZENS OF JEWISH FAITH THE OLDEST AND MOST WIDELY CIRCULATED JEWISH PUBLICATION IN THIS TERRITORY IffiT'U-—No- 45 tews Pray for Reace as Yom Kippur Starts Tonight Kfeek In Review I |y MILTON BROWN. J.T.A. I WARTDIE YOM KIPPUR ■Tomorrow (Saturday) the High Uiday season ends with the Fast From Kippur. In many parts ■ Europe it is a very different |y of Atonement than has been Kditiona]. I IN POLAND, synagogues in 1 43 yet unconquered areas have |en turned into shelters for the iugees from the Nazi-invaded Eu and relief stations for the lunded. In the war-devastated Cons, synagogues are under ■man control. The High Holi |y prayers are being said by the Eish Jew in his home or in his prt. Many devoted Rosh Hash- Ch to digging trenches for the Wish Army. Bhe conditions under which the Ebb Jews greet the New Year pdescribed by Boris Smolar, u Chief European correspond- I in a Paris dispatch. He ■ '?• y 4 > ■ V Ite is happening to the ■illation of Nazi-occupied Pol- K towns reaches hardly imagin- It proportions. Acting as con lerors, the forces of occupation |y contributions from the Jew- I population, imprisoning local Iwish leaders and rabbis as host les for payment and keeping all Ira under especially strict sur fclance as “pro-Polish” and ■ti-Nazi” elements, after con- Icating everything possible. ■lsolated from the rest of the Irld and living under martial p, the Jews in these areas exist Ithose in a huge prison, not per pted to gather in groups of three I more, nor to attend synagogues, pn during the High Holidays, pring for their lives, they hardly pw what the morrow holds for pm. Facing prespects of star pon, they watch all foodstuffs, Pnding flour and cattle, being ffiscated by the Nazis, either | military use or for shipment r° the interior of the Reich. Phe devastation which the Ger fri invasion has visited upon pish Jewry is marked also in r 88 yet unconquered areas of pnd, where Nazi aviators ap pntly select Jewish sections as pcial targets for aerial bombard- f nt , us was the case in Warsaw. F BRITAIN, Kol Nidrei has f® blacked out. Because of the F emergency, Chief Rabbi Jo rr H. Hertz has ordered drastic Fjsuinent of High Holiday ser r®. There will be no Yom P® eve ceremony this evening F 0 of the blackout. Tomor- F evening’s Neilah service, clos e. tae high Holidays, will be L hour ahead of time—be r fast has officially ended. F? c^ tj * ve of the tension under L t . ttle holidays are being cele- Krh^ ere th . e or<lers issued by L . Rabbi for synagogues in P event of air raids. The minis- L rhv re f to a< iviße those living L J. *° re turn to their homes t p . f ct others to the nearest r raid shelters. “For obvious [L ’ wen, women and F/ n Should say their prayers \ ° me on the High Festivals,”. I* ““ifuctions said. JACKSONVILLE, FLORIDA, FRIDAY, SEPTEMBER 22, 1939 American Jewry Honors Memory Os Louis Marshall **-'*.**■ .. . S s* . a' > Lmyx, , \ r M Jmmam* immL* Ac v JhuL E* * wg|gggA aSp J/k JER K. AHk W |||' i"'- ' a !C;'\| _ % 1 NH Hji On the occaslun of the: tenth anniversary of the death of Mr. Marshall, Jewish leaders made a pilgrimage to his grave on Monday, September 11th. The picture (above) shows Mr. Marshall being presented with a signed testimonial of 10,000 friends on the occasion of his seventieth birthday in December, 1926. In this rare photograph (from 1. to r.) are the late Nathan Straus, the late Felix M. Warburg, the late Louis Marshall, David A. Brown, Sol M. Stroock, gtnd Dr. Cyrus Adler, Mr. Marshall’s successor as president of the American Jewish Committee. An interesting account of the life of Louis Marshall appears in this issue on page 2. Local J. W. V. Leader Urges Neutrality "We of the Jewish War Veter ans of the United States, who fought and bled for our country on European battlefields in 1917-18, are determined that America shall stand united in its will to peace and human decency. When the guns stop, firing, when exhausted nations lay down their' guns and begirt to rebuild their shattered civilization, the example of a hap py, free and prosperous United States must light their way back to eternal brotherhood of man, declared Sidney Schain, Com mander of Jacksonville Post No. 199, Jewish War Veterans of the U. S., who spoke before the Veter ans of Foreign Wars at their 40th anniversary gathering Wednesday night at the old armory. “Our present neutrality must be a true neutrality because modem science has thrown across the oceans mighty bridges of split second communications. We must be ever on the alert to detect and reject the propaganda of those who preach lies and hatred. We must discriminate between truth and spacious falsehood. We must remember the lesson which is be ing taught in Europe by bombing planes and torpedoes —the lesson that hate propaganda always breeds distrust and eternal strife. We must be on guard not merely against the willful misleaders of bewildered European nations, but also against their imitators in our own land, who seek to set brother against brother, and American a- SIDNEY SCHAIN gainst American. "Now; more than ever before, we must preserve our comprehen sive national unity. It was unity under the guidance of George Washington which first brought us freedom; it is unity which has brought this nation to the heights of liberty, progress and selt - r ®'

spect among the nations of the world. Unity alone—the American kind of unity which encourages friendship and cooperation among SC preserve our Day Os Atonement Joins All Jews In Most Sacred Day Os Year Yom Kippur Following the traditions of ages, Jews will gather in the Synagogue Friday evening, Sep tember 22, the eve of Yom Kippur, the Day of Atonement, the most solemn holy day in the Jewish calendar. It is a day of fasting and prayer which will last until sundown, Saturday, September 23. All Jews, Orthodox, Conserva tive and Liberal observe this one holy day. Characteristic of the evening service that ushers in the holy day is the Kol Nidre chant whose origin is buried in the story of the past. One of the three festivals was evolved from an ancient autumn harvest feast, Yom Kippur was marked with great ceremony in the days of the second temple. A week was spent in prepara tion for the services, which were Germany Permits 77 Jewish Children To Leave For Palestine NEW YORK —Despite war con ditions which at first seemed to threaten the complete stoppage of immigration, we have just learned by cable from the central bureau of the Youth Aliyah office in London that children holding cer tificates for Palestine granted un der the last immigration schedule ARE BEING EVACUATED FROM GERMANY and ARE GOING TO PALESTINE AND NEUTRAL COUNTRIES. 77 Jewish children holding certificates for Palestine were permitted to leave Germany under the auspices of Youth ! Aliyah. The children are between the ages of 15 and 17 and were placed aboard an unnamed Italian steam er at Trieste, Italy on September 4. They are expected to arrive momentarily at either .the Tel Aviv or Haifa harbors in Pales tine. An additional 47 children also holding certificates for entrance into Palestine were permitted to depart from Germany last week. They arrived in Denmark where they will be given temporary shelter until steamship connec tions for the Holy Land can be made for them. The cable stated further that I there were “good hopes for the j evacuation of 3UO more German Jewish children very shortly.” The Youth Aliyah movement has transferred a total o f 5000 Jewish boys and girls to Palestine since 1934. Hadassah is the sole agency for the move ment in this country. Other cables Yeceived by Hadas s&h this week revealed that 400 of the 500 boys and girls evacuat national sanity and health. If we permit European animosities and hatred to destroy our unity, then we betray America by destroying the internal good will which makes America a great democracy,” Mr. Shain stated. parts of the world made a pil grimage to the temple in Jeru salem in order to participate in this ceremony of fasting and prayer for a New Year of life. After the destruction of the second temple, there was no longer a central place at which ceremonies were held. But in synagogues wherever Jews were settled, the prayers that had made up the temple services were recited. Each individual said his own prayers asking for forgiveness and for another year of good life. Not related to any nature festival or historic event, Yom Kippur probably developed out of a desire to prepare, in a fit ting way, for the grateful cele bration of the harvest which follows. NEW YORK (JTA)—Embark ing on a new century of the He brew calendar amid a bloody Eu ropean conflict, Jews throughout .the w«Uk,3tresß thg- hops Continued on* Page Five) ed from Central Europe have been given temporary refuge in train ing schools opened in England. Forty-one were permitted to enter Yugoslavia and 76 were taken in by the Swedish authorities who have opened a camp outside of Stockholm. There are still some 1200 child ren now living in warring coun tries to whom Palestine certifi cates were issued under the last immigration schedule. They will be sent to the Jewish National Home within the next few months if conditions permit. “The war has caused many neu tral countries to offer voluntary refuge to Jews,” Mrs. Epstein said. “The Youth Aliyah movement assures the maintenance and edu cation of Jewish children in Pales tine for from two to five years and we are eager to move them to the Holy Land as soon as pos sible. There we know they will be safe among their own people and able to forget the harrowing ex periences which began for them long before war was actually de clared. £w***..*»*v*..i. I Jewish Calendar Join a Synagogue ; Attend Its Services < < ; 5700-1939 ; Yom Kippur Sept 23 ! Shemini Atzereth Oct. 5 ' | Simchas Torah Oct. 6 1 ■ *Rosh Chodesh Cheshvan Oct. 14 ' | ♦Rosh Chodesh Kislev Nov. 13' > Chanukah Dec. 7 ; ! ♦Rosh Chodeeh Tebet Dec. 13 ' ; Fast of Tebet Dec. 22 ' ’ Holidays begin on the even- < ling preceding the dates desig-] nated. < ♦Also observed previous day. 1 ♦♦Observed following day - Ha <*. AA A A. A A.S PRICE 5c 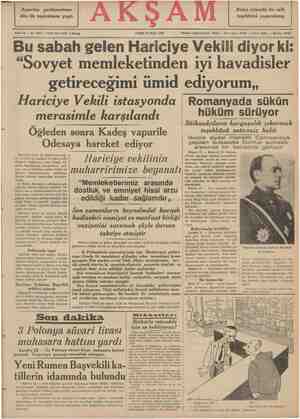 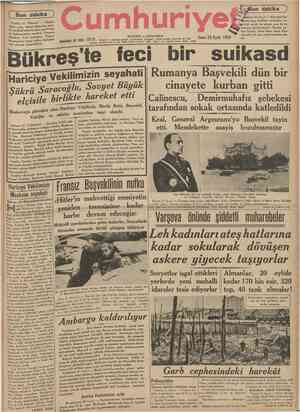 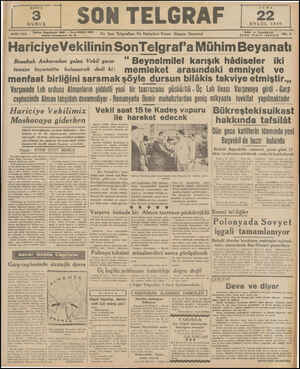 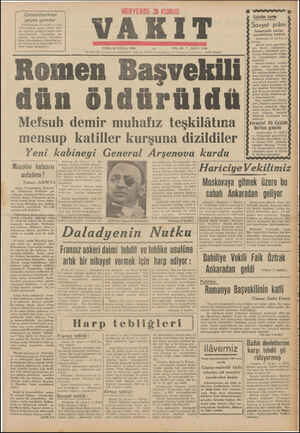 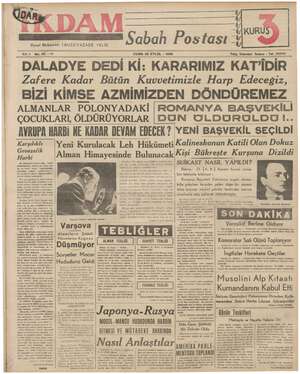 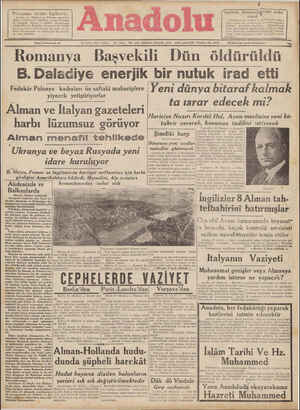 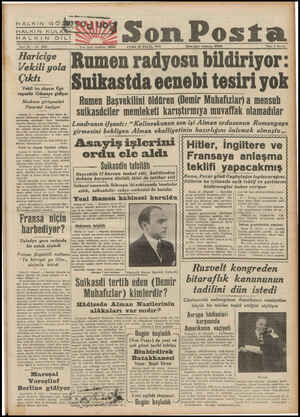 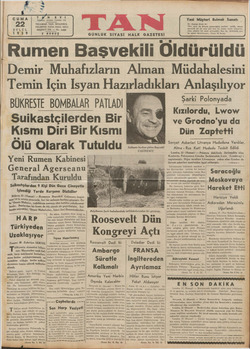 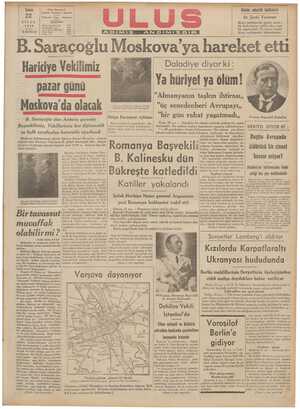 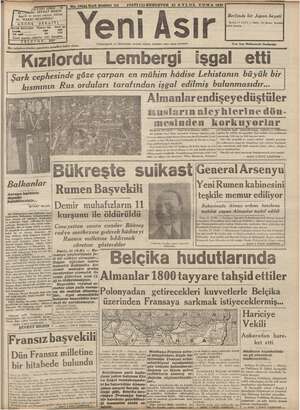 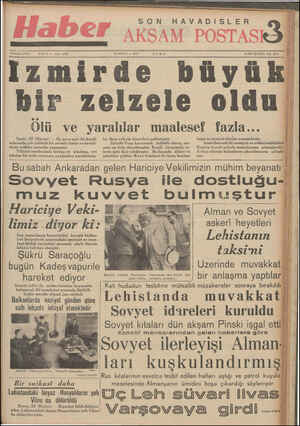 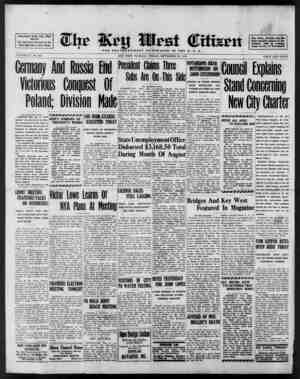 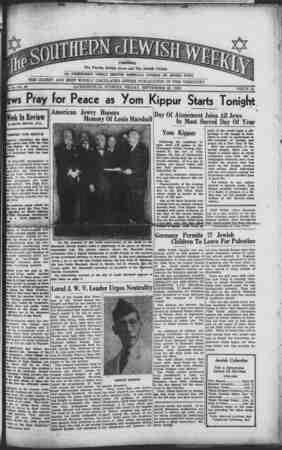 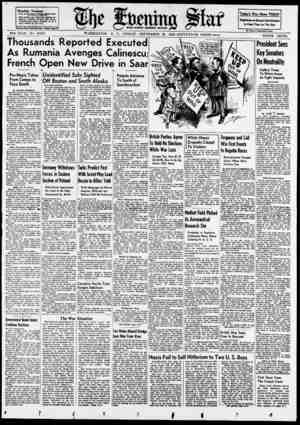