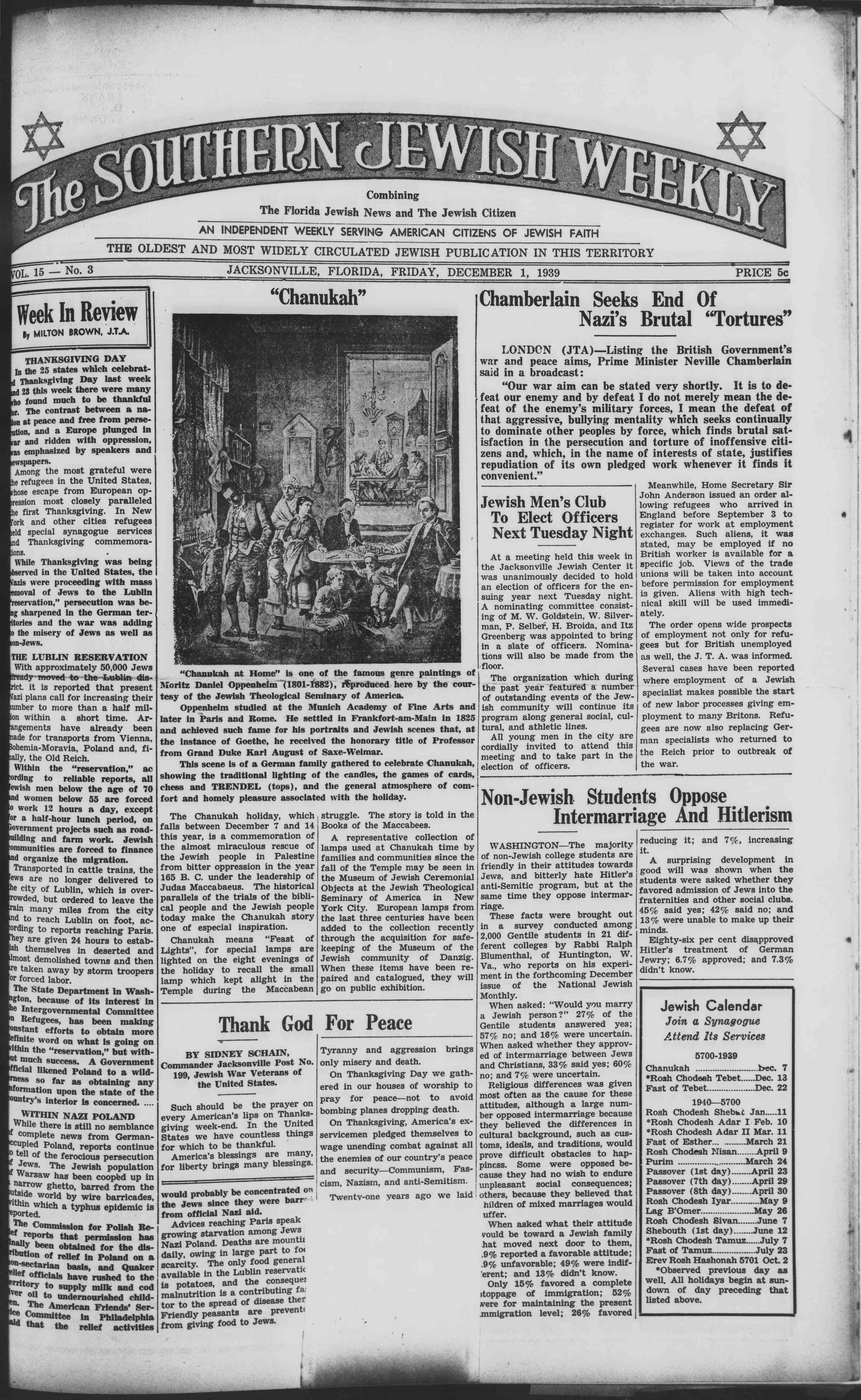 mr' the OLDEST AND MOST WIDELY CIRCULATED JEWISH PUBLICATION IN THIS TERRITORY pmTir No. 3 I Week In Review I By MILTON BROWN, J.T.A. thanksgiving day I In the 25 states which celebrat ed Thanksgiving Day last week Ed 23 this week there were many Eho found much to be thankful ■or. The contrast between a na- Kion at peace and free from perse- Etion, and a Europe plunged in Ear and ridden with oppression, Eas emphasized by speakers and ■ewspapers. 1 Among the most grateful were ■he refugees in the United States, Ehose escape from European op- Eression most closely paralleled Bhe first Thanksgiving. In New Eork and other cities refugees Eeld special synagogue services End Thanksgiving commemora flions. I While Thanksgiving was being Ebserved in the United States, the E'azis were proceeding with mass nmoval of Jews to the Lublin ■reservation,” persecution was be ing sharpened in the German ter- Ktories and the war was adding lo the misery of Jews as well as Eon-Jews. ■THE LUBLIN RESERVATION 1 With approximately 50,000 Jews Iflready-nrovedt© the-Lufelin dis- Brict. it is reported that present Eazi plans call for increasing their Eumber to more than a half mil lion within a short time. Ar rangements have already been Eiade for transports from Vienna, Bohemia-Moravia, Poland and, fi lially, the Old Reich. I Within the “reservation,” ac lording to reliable reports, aU lewish men below the age of 70 End women below 55 are forced lo work 12 hours a day, except lor a half-hour lunch period, on Bovernment projects such as road luilding and farm work. Jewish lommunities are forced to finance Ind organize the migration. I Transported in cattle trains, the lews are no longer delivered to |he city of Lublin, which is over crowded, but ordered to leave the Bain many miles from the city Ind to reach Lublin on foot, ac cording to reports reaching Paris, •hey are given 24 hours to estab themselves in deserted and llmost demolished towns and then Ire taken away by storm troopers ■or forced labor. I The State Department in Wash- Pgton, because of its interest in Pie Intergovernmental Committee |o Refugees, has been making ■onstant efforts to obtain more ■efinite word on what is going on Pithin the “reservation,” but with ■nt much success. A Government ■fficial likened Poland to a wild- B®ess so far as obtaining any ■formation upon the state of the ■°untry’s interior is concerned I WITHIN NAZI POLAND ■ While there is still no semblance I complete news from German ■ccupied Poland, reports continue E t of the ferocious persecution E J ews ’ The Jewish population ■ Warsaw has been cooped up in I ghetto > barred from the ■ taide world by wire barricades, pithm which a typhus epidemic is ■sported. I The Commission for Polish Re- | e Sports that permission has been obtained for the dis- Pibution of relief in Poland on a ■on-sectarian basis, and Quaker officials have rushed to the Pmtory to supply milk and cod f Ver oil to undernourished child pie American Friends* Ser (2 Committee in Philadelphia | a that the relief activities JACKSONVILLE, FLORIDA, FRIDAY, DECEMBER 1, 1939 “Chanukah at Home” is one of the famous genre paintings of Moritz Daniel Oppenheim 1(1801-1882), reproduced here by the cour tesy of the Jewish Theological Seminary of America. Oppenheim studied at the Munich Academy of Fine Arts and later in Paris and Rome. He settled in Frankfort-am-Main in 1825 and achieved such fame for his portraits and Jewish scenes that, at the instance of Goethe, he received the honorary title of Professor from Grand Duke Karl August of Saxe-Weimar. This scene is of a German family gathered to celebrate Chanukah, showing the traditional lighting of the candles, the games of cards, chess and TRENDEL (tops), and the general atmosphere of com fort and homely pleasure associated with the holiday. The Chanukah holiday, which falls between December 7 and 14 this year, is a commemoration of the almost miraculous rescue of the Jewish people in Palestine from bitter oppression in the year 165 B. C. under the leadership of Judas Maccabaeus. The historical parallels of the trials of the bibli cal people and the Jewish people today make the Chanukah story one of especial inspiration. Chanukah means “Feast of Lights”, for special lamps are lighted on the eight evenings of the holiday to recall the small lamp which kept alight in the Temple during the Maccabean Thank God For Peace BY SIDNEY SCHAIN, Commander Jacksonville Post No. 199, Jewish War Veterans of the United States. Such should be the prayer on every American’s lips on Thanks giving week-end. In the United States we have countless things for which to be thankful. America’s blessings are many, for liberty brings many blessings. would probably be concentrated on the Jews since they were - from official Nazi aid. Advices reaching Paris speak growing starvation among Jews Nazi Poland. Deaths are mountn daily, owing in large part to fo< scarcity. The only food general available in the Lublin reservatu is potatoes, and the consequei malnutrition is a contributing fa tor to the spread of disease the Friendly peasants are prevent* from giving food to Jews. “Chanukah” struggle. The story is told in the Books of the Maccabees. A representative collection of lamps used at Chanukah time by families and communities since the fall of the Temple may be seen in the Museum of Jewish Ceremonial Objects at the Jewish Theological Seminary of America in New York City. European lamps from the last three centuries have been added to the collection recently through the acquisition for safe keeping of the Museum of the Jewish community of Danzig. When these items have been re

paired and catalogued, they will go on public exhibition. Tyranny and aggression brings only misery and death. On Thanksgiving Day we gath ered in our houses of worship to pray for peace—not to avoid bombing planes dropping death. On Thanksgiving, America’s ex servicemen pledged themselves to wage unending combat against all the enemies of our country’s peace and security—Communism, Fas cism, Nazism, and anti-Semitism. Twentv-one years ago we laid Chamberlain Seeks End Os Nazi’s Brutal “Tortures” LONDON (JTA) —Listing the British Government’s war and peace aims, Prime Minister Neville Chamberlain said in a broadcast: “Our war aim can be stated very shortly. It is to de feat our enemy and by defeat I do not merely mean the de feat of the enemy’s military forces, I mean the defeat of that aggressive, bullying mentality which seeks continually to dominate other peoples by force, which finds brutal sat isfaction in the persecution and torture of inoffensive citi zens and, which, in the name of interests of state, justifies repudiation of its own pledged work whenever it finds it convenient.” Jewish Men’s Club To Elect Officers Next Tuesday Night At a meeting held this week in the Jacksonville Jewish Center it was unanimously decided to hold an election of officers for the en suing year next Tuesday night. A nominating committee consist ing of M. W. Goldstein, W. Silver man, P. Selbef, H. Broida, and Itz Greenberg was appointed to bring in a slate of officers. Nomina tions will also be made from the floor. The organization which during the past year featured a number of outstanding events of the Jew ish community will continue its program along general social, cul tural, and athletic lines. All young men in the city are cordially invited to attend this meeting and to take part in the election of officers. Non-Jewish Students Oppose Intermarriage And Hitlerism WASHINGTON—The majority of non-Jewish college students are friendly in their attitudes towards Jews, and bitterly hate Hitler’s anti-Semitic program, but at the same time they oppose intermar riage. These facts were brought out in a survey conducted among 2,000 Gentile students in 21 dif ferent colleges by Rabbi Ralph Blumenthal, of Huntington, W. Va., who reports on his experi ment in the forthcoming December issue of the National Jewish Monthly. When asked: “Would you marry a Jewish person?” 27% of the Gentile students answered yes; 57% no; and 16% were uncertain. When asked whether they approv ed of intermarriage between Jews and Christians, 33% said yes; 60% no; and 7% were uncertain. Religious differences was given most often as the cause for these attitudes, although a large num ber opposed intermarriage because they believed the differences in cultural background, such as cus toms, ideals, and traditions, would prove difficult obstacles to hap piness. Some were opposed be cause they had no wish to endure unpleasant social consequences; others, because they believed that hildren of mixed marriages would uffer. When asked what their attitude vould be toward a Jewish family hat moved next door to them, .9% reported a favorable attitude; .9% unfavorable; 49% were indif erent; and 13% didn’t know. Only 15% favored a complete itoppage of immigration; 52% were for maintaining the present .mmigration level; 26% favored Meanwhile, Home Secretary Sir John Anderson issued an order al lowing refugees who arrived in England before September 3 to register for work at employment exchanges. Such aliens, it was stated, may be employed if no British worker is available for a specific job. Views of the trade unions will be taken into account before permission for employment is given. Aliens with high tech nical skill will be used immedi ately. The order opens wide prospects of employment not only for refu gees but for British unemployed as well, the J. T. A. was informed. Several cases have been reported where employment of a Jewish specialist makes possible the start of new labor processes giving em ployment to many Britons. Refu gees are now also replacing Ger man specialists who returned to the Reich prior to outbreak of the war. reducing it; and 7%, increasing it. A surprising development in good will was shown when the students were asked whether they favored admission of Jews into the fraternities and other social clubs. 45% said yes; 42% said no; and 13% were unable to make up their minds. Eighty-six per cent disapproved Hitler’s treatment of German Jewry; 6.7% approved; and 7.3% didn’t know. Jewish Calendar Join a Synagogue Attend Its Services 5700-1939 Chanukah l>ec. 7 ♦Rosh Chodeeh Tebet Dec. 13 Fast of Tebet Dec. 22 1940—5700 Rosh Chodesh Shebvc Jan 11 ♦Rosh Chodesh Adar I Feb. 10 ♦Rosh Chodesh Adar II Mar. 11 Fast of Esther March 21 Rosh Chodesh Nisan April 9 Purim March 24 Passover (Ist day) April 23 Passover (7th day) April 29 Passover (Bth day) April 30 Rosh Chodesh Iyar May 9 Lag B’Omer May 26 Rosh Chodesh Sivan June 7 Shebouth (Ist day) June 12 ♦Rosh Chodesh Tamuz July 7 Fast of Tamuz July 23 Erev Rosh Hashonah 5701 Oct. 2 ♦Observed previous day as well. All holidays begin at sun down of day preceding that listed above. PRICE 5c 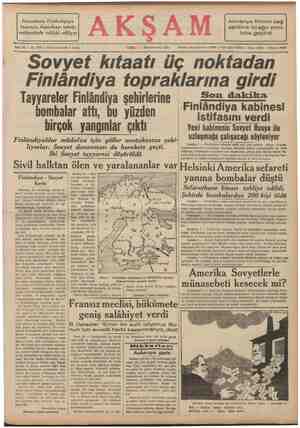 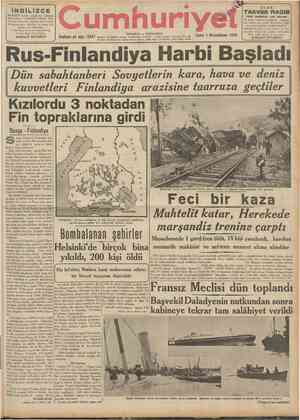 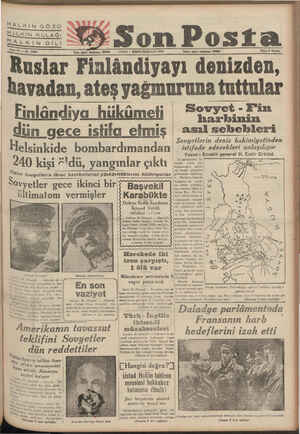 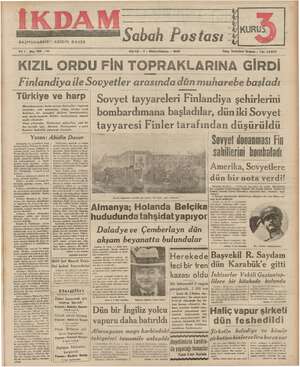 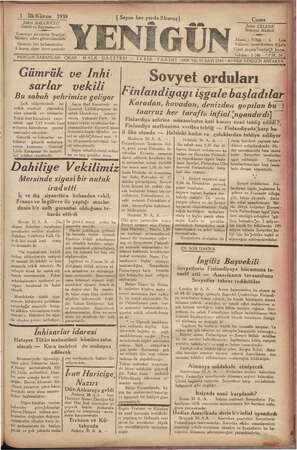 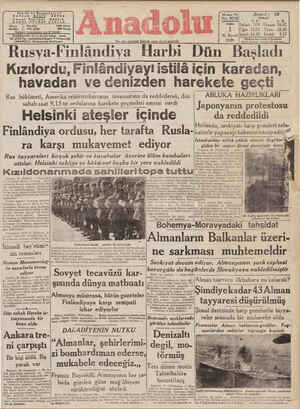 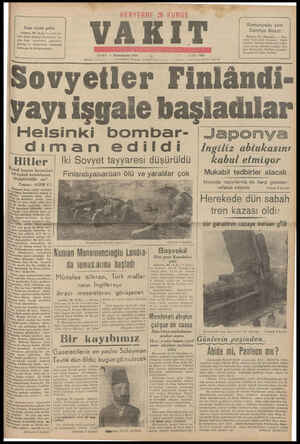 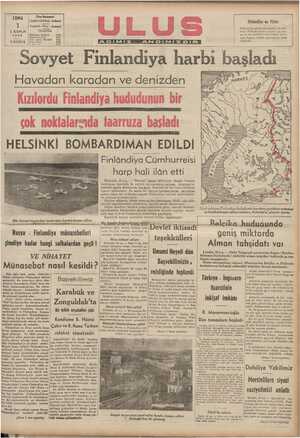 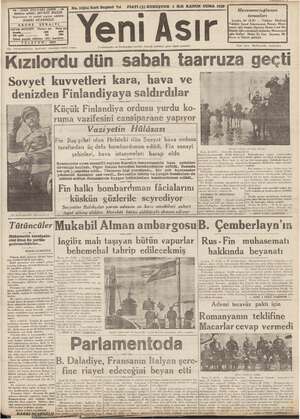 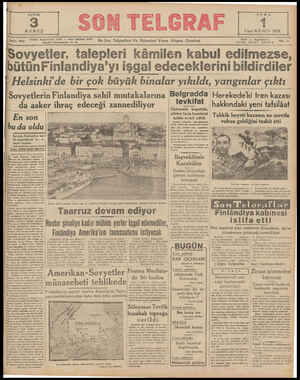 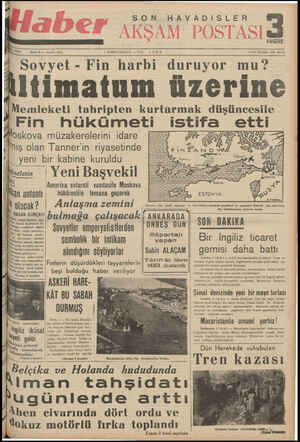 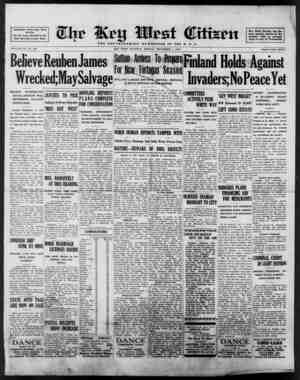 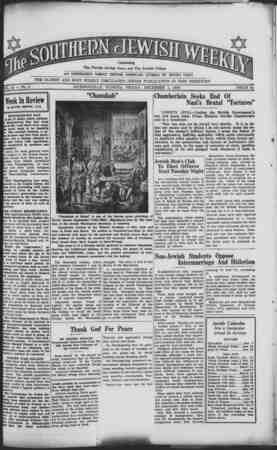 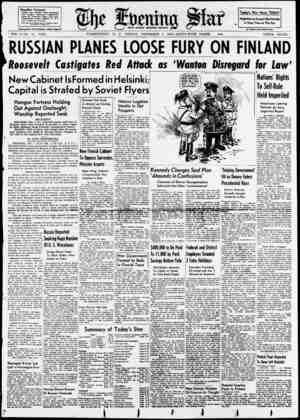